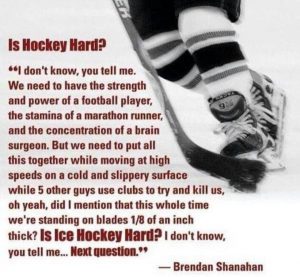 Bruins rebound from their double dip loss last week and upend the Hawks in week one of the playoffs.  The league’s leader in points, goals and assists – center Zach Wagner with the trick.  The Mikes – Brown and Garlick with singles.  Goaler “Smoking” Joe Polizzi had the glove hand working this game!  The Italian connection – sub Chris Isola(2) and Dave Marcero score for the Hawks.

Big Rob Rowling scores his second goal of the game with just three minutes left in the contest for the tie!  Steve “Mario” Lemieux with the Habs initial marker.  Larry “School Boy” Rowe with the tour du chapeau assist.  Brian Reath(52 ticks into the Game), Ward Peterson and Dr. Nate do the honors for the Fish.  Both goalies – Sharks sub Brian Miller and Gordy Nadolsky of the Habs with plenty of stops in nets.  Ward Peterson and Bob Herrgott of the Habs pick up simultaneous roughing minor penalties.

Ouch!  The Flyers show no mercy and destroy the Wings!  Mr. Mike “Padre” Nalepa with a huge five goal game!  Hats off to Mike!  Pun intended!  Paul “Brett Micheals” Vioalssi plays second fiddle with the hat trick!  John Cornish(2), Mark Rogers and sub Siedlik round out the carnage.  Wings sub Jeff “Marine” Steiber and Tringali tally for the Wings.  In the first shift of the game, old rivals Jimmy “Jets” Galloway(Holding) and Mark Rogers(Slashing) reacquaint themselves and hit the box in tandem.  Rogers picks up another slashing penalty two shifts later and then behaved himself the rest of the game!  I have to share a cute story about Jimmy “Jets” Galloway.  Back in the mid 70’s I used to work at Chatham’s warehouse with Jimmy’s Dad and uncle.  A few years back I ran into Jimmy’s uncle Frank and told him I’m playing in the same league with Jimmy.  Frank goes:” Is he still an A** H*** on the ice?  Honest to God – true story!  Too cute not to share!

Talk about a walking irony!  The Habs win the first half, then they descend convincingly into the basement in the second half.  But now we have the PLAYOFFS and the Habs are ready to play with a couple of ties today!  Deuces wild for Rob Rowling and Tim Craddock.  Goalie Gordy Nadolsky with an assist.  Bruins – Zach Wagner(2), Donnie Rivera and “Angry” Joey Ventimiglio.

The Wings recover from their game one trouncing and do the same to the Hawks!  Mike Riddle and sub Tringali with two goals apiece.  Singles for John McNeilly, Jeff Ivory and with an empty net short handed goal – Paul Erickson.   Jack Leavy and the Scotts – Chodun and Mitchell score for the Hawks, who were the first place second half winners.  John McNeilly and Brian Moore get into a “How Do You Do” and hit the box with roughing minor penalties.

Oh boy!  18 goals in today’s games for these playoff ready Flyers!  Sub Goalie Joe Nelson was the loneliest man on the ice today!  Feeling a little tired after his five goal game – Mike Nalepa only with the trick this game!  John Cornish with the deuce.  Singles for Paul Violassi(SH), Marty Papesh and subs “Skip” Lockwood(Also 3 Helpers) and Marcola.   Greg Stacey and Trevor Wrobel with the Hawks goals.  Danny Rea of the Flyers racks up a solo roughing minor penalty.

Which goalie has the most career playoff wins in the NHL?