RIP TO A TRUE GREAT WARRIOR AND PLAYER – BORJE SALMING!

ON THE SWEDISH TEAM THAT I WAS PLAYING AGAINST IN THE FLORIDA PALMS TOURNAMENT.

A PICTURE OF HIMSELF AND HIS TEAMMATE BORJE, IN THE LOCKER ROOM IN SWEDEN! 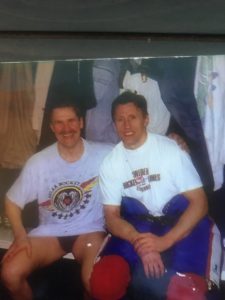 THE SECOND HALF COMMENCES!

Captain Trevor Wrobel of the Flyers scores his second goal of the game late in the final period for the Flyers victory!  Rob Hergott and Mark Rogers also tally for the Flyers.  Scoring machine Rob Rowling with the tour du chapeau for the Habs!  Anthony Amato of the Habs and returning from parts unknown – sub Jimmy “Jets” Galloway both hit the box with rouging minor penalties.

Danny Rea snaps the 4-4 tie late in the game for a rousing Hawks W!  Brian Moore with the deuce.  Singles for Steve Lemieux and Dave Rupprecht.  Bruins – Jamie Smith, Jim Robie, Jeff Steiber and Mike Nalepa.  Rex Baker with three assists.  Now to the fireworks!  I know this guy has a great passion for the game of hockey and always takes it seriously.  But having said that – maybe a little too seriously this game!  Bruins sub Scott Davenport received the following penalties:  a 2 and 10 minute unsportsmanlike and 2 game misconducts!

The Zach Wagner(2 & 1), Steve Bayagich(1 & 2) and Terry Boyette(3 Assists) line scores their teams first three goals to send the Wings on the victory parade.  Kurt Salvatore, Nate Wagner and after finally listening to his young goalie son  – “Dad quit shooting the puck straight at the goalie – make a move” – Scott Choudun with singles.  Sharks sub “Angry” Joe, Nick Piccolo and it was nice to see Nate McNaughtry back on the ice, tally for the Sharks.

The Wings pick up right where they left off last season with the sweep!  Deuces wild for line-mates Zach Wagner( Also 3 Helpers) and Steve Bayagich.  Sub Barker also with a goal.  Last season’s assist leader Terry Boyette with another hat trick assist game!  Goalie “Smoking” Joe Polizzi with a strong game between the pipes.  Paul Elsey Jr. with the lone Hawks goal.

Habs up 2-1 entering the final stanza – then the Bruins rattle off four consecutive goals for the W!  Mike “Padre” Nalepa scores twice for the Bruins.  Jamie Smith, Jim Robie and after what transpired last game, why was he even playing this game? – sub Scott Davenport with singles.  Goalie Gordy Nadolsky with an assist.  Anthony Amato and Rob Rowling score for the Habs, who after ending last season on an extended undefeated streak, drop two today!  Anthony Amato(Chop) and sub Davenport(Roughing) receive minor penalties and hit the box in tandem.

The Flyers sweep on the day and the Sharks descend in the other direction.  As in game one – Trevor Wrobel scores twice for the Flyers.  Ward Peterson, Mark Rogers and Billy Reiss also with Flyers markers.  It was good to see Dar back guarding the nets in his usual capable fashion.  Nick Piccolo(2) and Mike Garlick tally for the Sharks.

This former NHL player won a

the Stanley Cup in 2001 with the Avs and