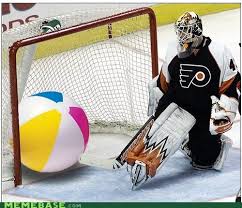 It was one of those tough games for the goalies – who will not be mentioned – Lol!  Zach Wagner with the game winning shorthanded goal.  Greg Stacy with the trick.  Robbie Olmstead with the deuce.  Sub Paulie Polizzi with a single.  Deuces wild for Mike “Padre” Nalepa and Paul “Stork” Erikson.  Steve Bayagich and Brian Moore with singles.

Big Rob Rowling scores his second goal of the game to snap a 3-3 tie for the W.  Captain Joey Reiss and sub Rob Ahughe also score for the Frenchmen.  Goaler “Smoking” Joe Polizzi had his glove hand working today!  Steve Lemieux, sub Tringali and scoring his first goal since the introduction of the composite stick – Lou Suvak tally for the Sharks.

Bruins up 2-1 entering the final stanza – then they had a Fish smorgasbord!  Deuces abound for Steve Bayagich, Mike Nalepa and Paul Erickson.  Singles for Paul Violassi and Glenn Howarth.  Rex Baker and Brian Moore with hat trick assist games.  Mike Garlick, Nate McNaughtry and scoring in back to back games today, since St. Clair Shores had one arena – Lou Suvak!  Brian Moore of the Bruins picks up a solo roughing minor penalty.

The line of Zach Wagner(2 & 3), Rob Giroux(2 Goals) and Robbie Olmstead(3 Helpers) total ten points in the game to lift the Hawks over the Habs.  Greg Stacy also tallied for the Hawks.  Another two goal game for Rob Rowling and another single for sub Rob Aughe round out the Habs scoring.

What was the character name of the goalie in the 1992 MIGHTY DUCKS movie?