CONGRATS TO THE MICHIGAN STING 60 AND OVER PORT HURON TOURNAMENT CHAMPIONS LAST WEEKEND!

TOMMY GAZLEY NEVER LET A PUCK GET BEHIND HIM! 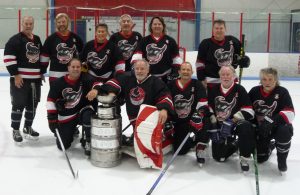 Rookie of the candidate John Poolton(All He Does is Score) scores his third goal of the game late in the final period to snap the 3-3 tie!  Rockford call up Mike Ala with a rebound goal.  Rob Hergott, Ward Peterson and sub Kostesich tally for the Flyers in this penalty free game.

Whoa!  Jeff “Marine” Steiber with a career best five goal game!  Jeff scores the final five Bruins goals, including the game winner with just under two minutes left in the contest!  Jamie Smith with a five assist game!  Midtown Mikey Brown with the Bruins initial goal.  The top line of the Wings factor in all of their scoring, with deuces wild for Zach Wagner and Terry Boyette.  Line-mate Steve Bayagich also with a goal and three helpers.  This was a penalty free game.

Habs young sub goalie Nick Santi spins the whitewash for the Frenchmen.  Grizzled veteran Lou Suvak finds the back of the net along with the energizer bunny, Anthony Amato.   No red flags on the beach as there were no Sharks sightings.  Another penalty free game.

The second place Hawks sweep on the day behind the two goal efforts of Steve “Mario” Lemieux and Brian Moore.  Dave Rupprecht also with a goal.  Like a Timex watch, this guy just keeps on ticking – Rex Baker scores twice for his Bruins!  Somehow finding some time to sneak in two hockey games today, as his Clarkston Everest Academy takes on Marine City Cardinal Mooney in the district football playoffs Friday – Mike “Padre” Nalepa with a single.  Master facilitator Jamie Smith with three more assists and eight on the night!  Steve Wink(Hooking) of the Bruins puts a hook on John Poolton(Roughing) who takes exception and they reside together to the box.

Once again the Wings top line score all their goals as Zach Wagner(2) and Steve Bayagich(1) do the honors.  Puck stopper “Smoking” Joe Polizzi shined in nets!  John Cornish with the Sharks only goal of the day.  John Siedik of the Wings and Sharks sub “Timothy” O’Leary get into it and both receive roughing minor infractions.  The Sharks had five trips to the sin bin this game.

A rare occurrence in any league, let alone in this run and gun league – the double shutout for sub goalie and former Romeo Bulldog High School goalie and 2013 All-State and team Co-MVP Nick Santi!  The kid was awesome!  It was rumored that Habs regular goalie Billy Schaugg was spotted somewhere wandering in the Chicago area.  Rob Rowling and Paul Erikson score for the Habs, who win by identical 2-0 scores today!  The Habs are 7-0-1 in their past eight games and are still are only in third place!  The undisciplined Flyers rack up six penalties in the game, as Part Wosek of the Habs and Brian Reath of the Flyers both receive roughing minor penalties.  Pierre Dugas of the Flyers with a solo roughing minor penalty and even sub goalie Tommy Gazley got into the action with a tripping penalty.

Name the first European Captain to win a Stanley Cup?

The Red Wings own Nick Lidstrom.