Obviously very strong at center.  Wings are interchangeable and solid players.  Two very good defenseman and two very dependable defenseman.  For me – the goalie is the key and question mark for this team.  I have not seen him play.  He has good stats in the “R” league.  Will that transfer to the “A” league?  Time will tell.

Very good goalie!  He will see rubber with this core of defenseman.  Can this team generate enough offense?  First three forwards are good.  But second line could be long in the tooth and question marks abound.

This team will struggle to score.  Forwards?  D is excellent!   Billy Mac Jr. should have a rebound year with longtime defense partner Lou Suvak ready to bail him out!  Goalie is solid.  No Jeff Ivory this year as he transitions to the “R” league and takes care of family obligations on Thursday’s.

Very good team!  Offense, defense and goalie are plus players.  One question – is there enough pucks for a Rowling – Riddle team?  I know Rob Rowling is ecstatic to be reunited with mentor Mike Brown, who will enthusiastically tutor Rob all season!

Oh – this team will score!  I love the forwards!  Huge question on defense – who the heck is going to stay home?  Goalie will get his share of work. 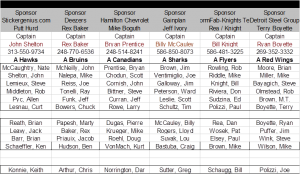