HAPPY NEW YEAR TOO ALL!

The Wings win their second game of the year spearheaded by the two goals from the ageless Terry Boyette!  Singles for Brian Moore and the Steve’s – Bayagich and Wink.  Line-mates John McNeilly, Mike Napepa and Joey Reiss score for the Bruins.

The Sharks bludgeon the Hawks!  Jimmy “Jets” Galloway with the hat trick!  Singles for Billy Mac Jr., Ward Peterson, Craig Bastuba, Lloyd Rogers and sub Scott Bozyk.  Nate McCoughtry with the trick for the Hawks.  Curt Lesnau and Brian Reath also score for the Hawks in this penalty free game.

You lay a stack of pancakes in front of the big guy – he’s going to devour them!  You give the big guy ample scoring opportunities and he’s going to devour you!  Mr. Rob Rowling with a huge four goal game for the victorious Flyers!  Mike Riddle also with a Flyers goal.  Mike “Padre” Nalepa(2), Joey Reiss and Marty Papesh score for Baker’s Bruins, who only had one loss going in todays game’s and have now have doubled that figure.  Center John McNeilly assisted on all four Bruins goals.  Flyers winger Paulie “Knuckles” Polizzi picks up slashing and unsportsmanlike conduct minor penalties early in the final period.

The battle for first place, as both teams remain tied for the top spot in the standings.  The Habs battle back from a late 3-1 deficit to tie it up!  John Cornish, Bryan Prentice and sub Paul “Stork” Erikson tally for the Frenchmen.  Hawks sub Jeff “Marine” Steiber(2) and Nate McCoughty with the Hawks markers.  This was a very tough game for Dr. Nate, as he suffered an oblique(Most of us even don’t have an oblique) injury, lost a tooth and broke his stick!  He had to be helped off the ice and did not return.  Check out his stick below as it was hit with just a normal pass and snapped in two!  Nate wonders if JP offers any type of warranty on this China made stick!  Were tariff’s involved and the Chinese are now making these sticks cheaper?  Hmm! 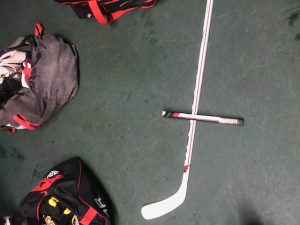 Not a trivia question – just a question to you hockey aficionados.
#99 is retired league wide.
Why not #9?
Gordie, Rocket and Bobby Hull!
Really?
Prev post