WHAT A GREAT PICTURE OF STING TOURNAMENT PLAYER AND LOCAL HOCKEY LEGEND, ANDRE VAN ON HIS ACTUAL 70TH BIRTHDAY!

THIS PICTURE OF ANDRE, MYSELF AND MY WIFE TSUCHIE, WAS TAKEN AT FREEDOM HILL TWO SATURDAYS AGO DURING THE STEVE MILLER BAND AND PETER FRAMPTON CONCERT. 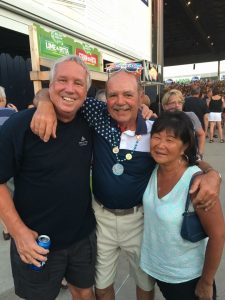 Flyers center Donnie Rivera goes top shelf water bottle in the waning seconds of the game for the Flyers W!  This game was played in less than ideal conditions due to the high humidity and the swimming pool ice conditions.  With his teenage son in attendance – Steve “Mario” Lemieux with the deuce for the Flyers.  Mike Nalepa with the Flyers initial goal.  The league’s leading scorer Dr. Nate McCoughtry with a two goal game for the Hawks.  Timmy “Dutch” Schultz with a single.  Despite allowing a four spot – Hawks net-minder Scott French was outstanding between the pipes!

Power center Mike Riddle with the trick for the Sharks.  Billy Mac Jr. with the game winning marker.  Playing with just nine players today – Chris Isola and Kyle Lybecker score for the Frenchmen.  Paulie Polizzi(Tripping) and Chris Isola(Slashing) hit the box in tandem.

Ouch!  Six zip Sharks after one period!  This was the first time in ten years, frustrated Wings goalie Kirk “Captain America” Larson broke his goalie stick in anger!  Deuces wild for Billy Mac Jr. and Mike Riddle.  Singles for Jeff Ivory, Mike Ala and the Browns – Mike and Jimmy, who also had three helpers.  Shades of Gordie, Mark and Marty – the Wings assembled the all Boyette line to start the final period!  Dad Terry centering sons Dana and Ryan.  Guess what?  Twenty ticks into the period, Dana scores with assist’s from his Dad and brother!  Pretty cool!  Ryan and Joey Reiss also with Wings goals.

The Flyers sweep for the day, as they make a tactical lineup move by moving defenseman Lloyd Rogers up too left wing.  It worked, as Lloyd records his first career hat trick, making brother Mark look like a fourth line center!  Habs goalie Brian Miller took extreme exception to Lloyds third goal in the final seconds of the game, as he vehemently verbally expressed his opinion during and after the game toward Lloyd.  Brian though it was unnecessary rolling up the score.  Single goals for Mike Nalepa, Donnie Rivera, Pierre Dugas, Danny Rea(Also 3 Helpers) and Billy “The Dark” Knight who also contributed four helpers.  Steve Lemieux also with a three assist game, as the line of Lloyd Rogers, Billy Knight and Steve Lemieux total 11 points in the game!  Robbie Olmstead with a nifty back hand goal for the Habs.

One week remaining in the season(Two Games) and the first place Hawks hold a one point lead over the second place Sharks.  They do not play each other next week.  Deuces wild for Chris Gerbino and JP.  Danny Shannon, Dr Nate and Marty Papesh with singles.  Marty had his Dad and brother from out of town in attendance today as Mom was at home cooking a lasagna dinner.  Baker’s Bruins had a tough day today as they drop a deuce and allow 14 goals on the day!  Sub goaler Rodney Heid could be seen skating off into the corner following a goal muttering expletives.  Mike “King of the Road” Miller with a two goal game for the Bruins.  Singles for John McNeilly, Joey Ventimiglio and sub James Puffer.  Captain Rex Baker with three assists.  “Angry” Joey Ventimiglio and the Hawks Scott Chodun both pick up minor unsportsmanlike penalties.  Later on in the game the Hawks Eddie Sudzina incurs a solo roughing minor penalty as he took exception to the Bruins Jim Puffer calling him a fat moron!  Eddie attempted to explain to Puffer – “I’m not a moron!”