Flyers goal-keep Kirk “Captain America” Larson stood on his proverbial head in this contest turning shot after shot away!  Danny Rea and sub Larry “School Boy” Rowe score for the Flyers.  Steve Bayagich and Paul Violassi were the Wings marksman.  Violassi and Flyers antagonist Mike T. Brown get into a “How Do You Do” and hit the box with roughing minors.

Returning from his one week sabbatical – Hawks center Brian Moore with a two goal game.  Singles for Marty Papesh and Steve “Mario” Lemieux.  Goaltender “Bruce” Sutter with a strong game.  Scott Chodun and Bob “Claude” Giroux score for the Frenchmen.

The Bruins we’re minus their enigmatic goaltender Dar today.  But he was their in true Bruins spirit, as evidenced by this BMW in the parking lot!  Is that his goals against – Lol! 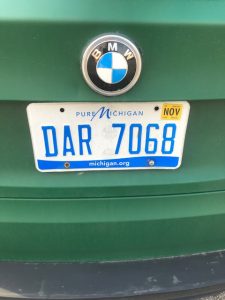 Deuces wild for Bruins centers Dr. Nate McNaughtry and John McNeilly.  Left winger Mike Garlick with a single.  Jeff Ivory and subs Rob Duff and Barker score for the Fish.  Sharks goalie Scott French took a nasty shot flush in his helmet from Dr. Nate.  After laying down for a brief period, one of the Bruins player skated by and said: “Being a goalie – he’ll be ok – it just hit him in the head!”

Da Sharks take out some season going frustration in this contest against the Hawks!  Following the game, sub Rob Duff calls the absent Jimmy Brown and tells him to stay home next week – “I got this Jimmy!”  Sub Barker with the natural final period hat trick!  Singles for Jeff Ivory(And 4 Helpers to boot!), Mike Riddle, Donnie Riviera and subs Howard Smith and Rob Duff.  As in game one – Marty Papesh and Steve Lemieux score for the Hawks.  Lemieux also picks up a solo roughing minor penalty.

The Flyers upend the top spot Bruins for the second straight time behind the acrobatic net-minding of Kirk Larson!  “Captain America” was unbelievable in both contests today!  “Dr. Nate Who?” Larson exclaims after the game!  Danny Rea, Mike T. Brown and sub Paul Erikson score for the Flyers.  Mike Garlick with a top shelf rocket goal for the Bruins.  One of the best one-liners I’ve heard in a while came from Mike T. Brown in this game.  Mike and “Old Man” Jack Priauix get into a scrum in front of the Bruins net.  Mike T. Brown fires back at the age 60 plus Priauix: “At least I’m still having sex!”   Gotta love hockey players!

On October 9, 2015 Dylan Larkin became the Red Wings first teenager to score in his NHL debut since 1983.  What other teenager did this feat for the Red Wings?
Scroll down for the answer.
–
–
–
–
–
–
Steve Yzerman
Prev post