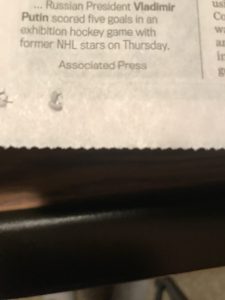 WHO’S GOING TO DEFEND HIM???

Longtime ESPN host and NHL analyst Steve Levy(See Picture Below) lookalike, Mr. Bruce “The Enabler” Gooel with a huge four goal game! Line-mates General Robert E. Lee and Gary Szylanski both with hat trick assists, totaling ten points in the game for the line!  Big Ben Haynes also with a goal.  The Wings were in the Sharks end most of the game, but goalie Brian Miller was stellar in nets!  Grand Rapids call up Todd Schurman scores twice for the Wings.  Singles for Paul Violassi and Sammy “The Bull” Bonanno.  This was a penalty free game.

Mike Ala scores 33 ticks into the game for the Habs!  Then the Hawks respond with five consecutive goals for the W!  The Kens – Debus and Wilkins score late French goals.  Mark Smyth scores twice for the Hawks.  Singles for Marcin Niecalek, Doug Wargo and sub Mike Garlick.  “Gentleman” Don Courtley and Mark Smyth take turns chopping each other and hit the box in tandem.

Swift center Robert Stempian with the hat trick for the victorious Flyers.  Captain Ryan O’Rourke also finds the back of the net.  Goaler Bobby Rutkoske was outstanding in nets!  Chuck Mouranie with the lone Bruins marker in this penalty free game.

Da Sharks sweep today as the Bruins descend in the other direction.  Rob Lee, Bruce Gooel and Ben Haynes tally for the Fish.  Chuck Mouraine with all of the Bruins goals today, as he scores twice this game.  Is it possible the Bruins still have not recovered from that deveasting 1-0 game one loss last week, as the winning goal rolled into their net with a couple of seconds left in the game?  Another penalty free game.

Both teams remain undefeated in the playoffs!  The second place Flyers play a great game as the score indicates!  Robert Stempian with the Flyers late first period goal.  Doug Wargo with the Hawks marker.  Both goalies – Tommy Gazley and Bobby Rutkoske put on a goaltending clinic!

Whoa!  Who saw this coming?  Mr. Jimmy George with a five goal game!  Three of his goals were the same cross crease backhand move!  George also added two helpers for a seven point game!  Paul Violassi with the hat trick.  Singles for Eddie Higgins and Sammy Bonnano.  The reeling Wings really needed this game, as things were getting a little tenuous in the locker room.  If anything, this lone victory helped!  Converted defenseman Ken Debus scores twice for the Habs.  Don Courltey and Jeff Tracy also score.  If the winless Habs listen real hard, they can hear the faint singing of a fat lady(Picture Below) in the not too far distance.

This is a toughie, but a very informative question.
There are 17 NHL goalies that are alive that played in at least 1 Original Six game : “Pre October 67; Youngest being 76: Eldest 90: Have fun