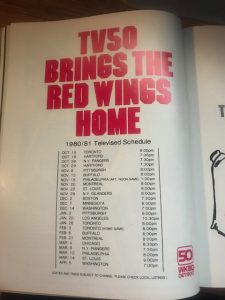 AH – THE OLD DAYS WITH THE UHF CONVERTER ON TOP OF YOUR TV!

HOME COOKING WAS NOT TOO GOOD,  AS THE VISITING TEAM WON ALL SIX CONTESTS TODAY!

Sub Lawson leads the Bruins over the Habs with a two goal game.  Singles for Adam Godard and Doug Wargo.  Goaler Mike Mostyn was solid between the pipes.  The Jeff’s – Ivory and Tracy tally for the Frenchmen.

Pat Collins, Steve Orr and the venerable Gary Enmark dent the twine for the Hawks.  Goalie Bobby Rutkoske with an outstanding game in nets.  Billy Hagen went five hole for the Wings.  Hawks enforcer Randy Debeul picks up a roughing minor penalty all by himself.

The Hawks sweep today after losing their first two games of the year last week.  As in game one, the same players score for the Hawks: Steve Orr(2), Pat Collins and on a thundering slap shot, Gary Enmark.  Jeff “Dick” Tracy, Cam “Steamboat” Lawrence and “Gentleman” Don Courtley do the honors for the Habs.

The league’s leading scorer Bruce “Cooler Man” Gooel leads the Flyers with a two goal game.  Singles for Jimmy Powell and sub Steve Lemieux as the Flyers sweep on the day.  Ronnie Meltsner and Billy Hagen tally for the sub laden(4 Subs) Wings as they drop a deuce today.  Peter Gibb with a two penalty game for the Wings(High Sticking Minor and a Solo Roughing Minor).

There have been four players who have won the Lady Byng Trophy at least four times.

Hint – Two of them played for the Detroit Red Wings and one played for Edmonton.