Lace up the skates and crack open a few beers.

It’s a rite of passage when a player gets benched in front of his hometown friends and family during an outdoor NHL game.

That’s exactly what ex-Detroit Red Wings star and Hockey Hall of Famer Chris Chelios claims happened during the 2009 Winter Classic, after being benched by ever-abrasive coach Mike Babcock at Wrigley Field in Chelios’ hometown of Chicago.

“He tried to healthy scratch me in the outdoor game in Wrigley Field against Chicago because he knew it was my hometown,” Chelios, who played 26 seasons in the NHL, including 10 in Detroit, said Monday on Barstool Sports’ Spittin’ Chiclets podcast. “Just things that were so unnecessary just to show that he’s the boss.” 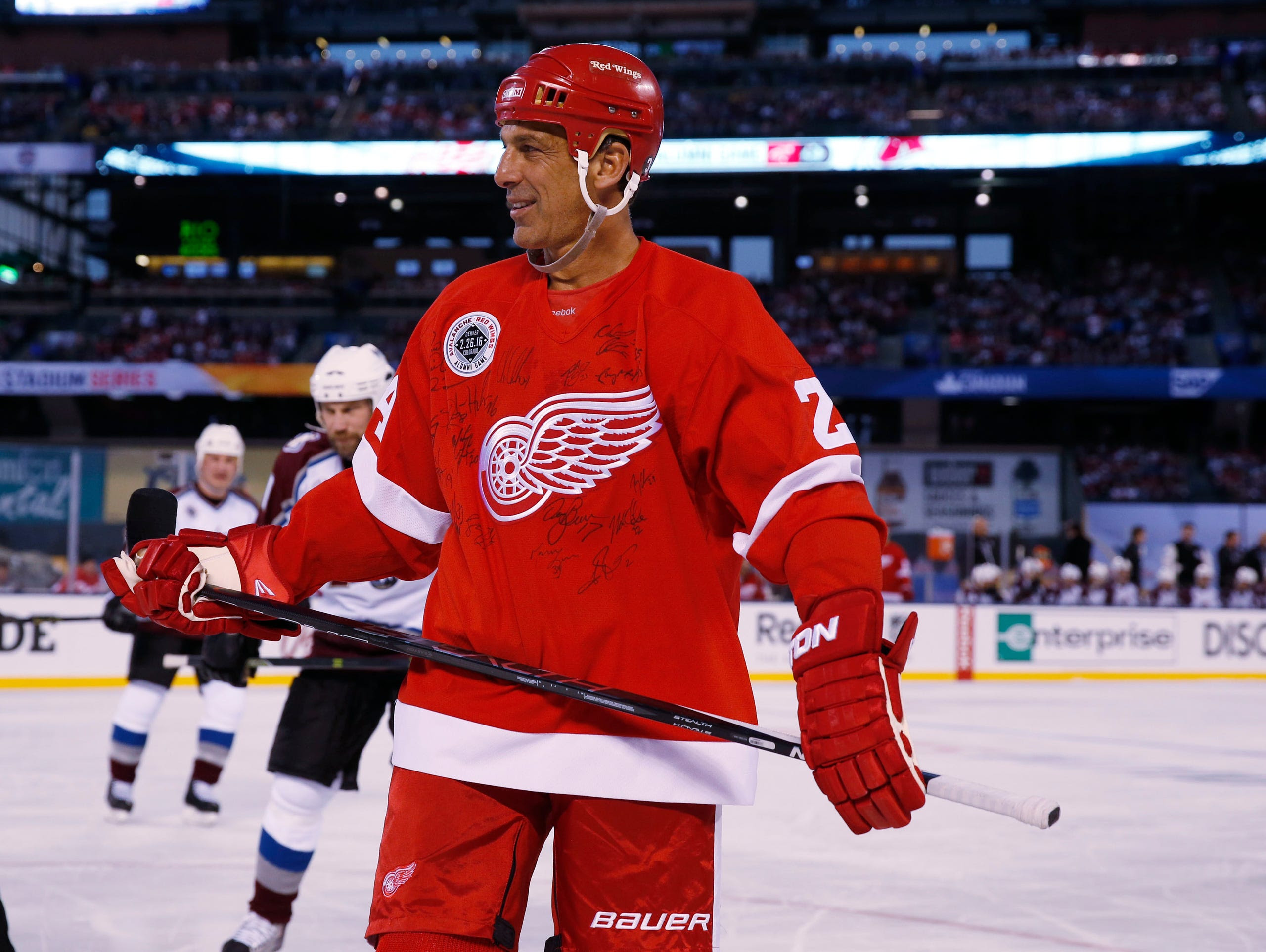 Detroit Red Wings defenseman Chris Chelios wears a sweater signed by teammates against the Colorado Avalanche at Coors Field in Denver on Feb. 26, 2016.

Chelios, who last played in 2009-10, played five shifts and received just 1:57 of ice time before being benched, according to the box score of the game.

And then he said he started pounding beers.

“Again, and you know it’s funny,” Chelios continued. “I’m sitting there. Second period and my two sons were about 40 feet, you know, sitting on the boards and they’re looking at me going, ‘What’s going on?’

“And I look at them. I tip my glass like you know my cup, to get me a beer. So my two boys were handing me beers the whole game. And then (Brad) McCrimmon tried to get me to go out there with a minute left to kill a penalty. I said, ‘Not a chance.’ ”

Another game with playoff hockey at it’s best!  A very auspicious start to this game, as Bruins goalie Mike Schlimgen forgot his skates!  The Bruins play the first two minutes of the game with player Dave Gaskey in nets, as he shuts out the Hawks!  Hawks center Mark Smyth scores the game only goal with four ticks left on the arena clock!  Ouch!  An extremely tough loss for the Bruins!  Former Hershey Bear and Muskegon Lumberjack goalie Tommy Gazley, was excellent in nets with the shutout!

Sniper Robert Stempian goes hat trick on the Wings!  Pat Berry and on a beautiful top shelf water bottle shot – Keith Foucher round out the Flyers scoring.  Flyers goalie Bobby Rutkoske was outstanding in nets nets as he allowed zero rebounds!  Sammy Bonnanno and Kenny Perko score for the Wings.

A much easier game for the Hawks this time!  Pregame locker room, Wings Captain Howard Smith is talking game strategy.  “Guys – you have to pick up Hawks center Mark Smyth, pay attention to him!”  Howard was right on as Smyth scores twice!  Singles for Marcin Niecalek, Steve Orr, Brian Belloli and sub defenseman Tom LeWis.  A relatively light workload for Hawks goalie Tom Gazley.  Eddie Higgins with the lone Wings marker as they drop a deuce today.

Robert Stempian snaps the 3-3 tie late in the final period for a Flyers sweep!  Keith Foucher with the deuce.  Sub Schurman with a single.  General Robert E. Lee scores twice for the Sharks.  Doug Beck with their middle goal.

Oh boy!  This was a wild one!  Steve Lemieux, Chuck Mouraine, Dave Gaskey and sub Mike Harke score for the Burins.  Goaler Mike Schlimgen shined in nets!  Jeff Tracy with the lone French goal on the day, as they drop both games today.  Now to the excitement!  No stranger to the penalty box, Habs defenseman Ken DuBus and Bruins Captain Steve Lemieux get into it and both pick up minor unsportsmanlike conduct penalties.  As they exit the box, they once again exchange pleasantries and both get hit with ten minute unsportsmanlike conduct penalties!  Not done yet! With seven minutes left in the game, DeBus incurs another two minute unsportsmanlike conduct penalty and a games early exit.  Not to be undone – 50 seconds later, Lemieux picks up his third penalty of the game with a solo roughing minor and his early game exit.

Which NHL HOF’er played on more Stanley Cup-winning teams (eight) than any other player who never played for the Montreal Canadiens; Henri Richard (11), Jean Beliveau (10), Yvan Cournoyer (10) and Claude Provost (9) won their Cups with the Canadiens.