A BLAST FROM THE PAST! 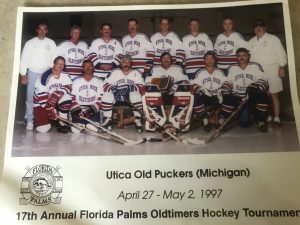 How bout that!  The Hawks snap their nine game winless streak in fine fashion!  Fresh off his 60 and over Michigan Sting Port Huron Tournament victory this weekend – goalie Tommy Gazley blanks the Habs!  The game was scoreless heading into the final period.  Then just 30 ticks into the final period, forward Brian Belloli goes five hole for the Hawks.  Subbing for Sammy Bonnano for the past two weeks – Mike Garlick with the deuce.  It is rumored that high scoring Hawks forward Bonanno, is in the midst of bitter contract dispute with Hawks management.  No Habs highlights and no trips to the sin bin for either team.

Gotta give these predatory Sharks credit.  Bruins jump out to an early 3-0 lead, only to see the Sharks not give up and force the tie!  Doug Wargo, Chuck Mouraine and on a absolutely beautiful top shelf rattling water bottle backhand shot – Joe Plati score for the Bruins.  Steve “Barney Miller” Dietrich, Todd Schurman and sub Bob “Bugsy” Watson tally for the Fish.

Complete domination this game, as Mike Lawson leads the Wings with a two goal game.  Singles for power forwards Doug “Jeff” Beck and Marcin Niecalek.  Puck stopper Dave Gaskey with an excellent game between the pipes!  Flyers sub Matt Dawson keeps it in the family, as he scores the Flyers goal playing against Dad.  In the Halloween spirit,  Flyers Captain Ryan O’Rourke picks up a minor high sticking penalty.  According to numerous reported accounts, if his stick had connected with Wings goalie Gaskey, that instead of the Headless Horseman – Gaskey would have been the Headless Goalie!

Playing with a full compliment of players, the Habs play a great game and tie the top spot Wings!  All the scoring was accomplished in the final stanza.  Rushing defenseman Dave Debrinacat put the Wings up 2-1 with a power play goal with just under a minute left in the game!  30 seconds later, Al Pyc of the Habs returns the favor with just seconds left on the arena clock for the tie!  Don Courtley with the Habs first goal.  Marcin Niecalek with the Wings initial marker.  Both goalies – Dave Gaskey and Habs sub “Ticker” shined in nets!  Habs sub Ken Debus and Wings forward Doug Beck both receive simultaneous body checking penalties.

The Bruins flip the narrative, as they blow a three goal lead in game one, only to come back from a 3-0 deficit in this game for the W!  Steve “Mario” Lemieux with a two goal and a backbreaking shorthanded goal for the Bruins final marker.  Singles for Curt Lesnau, Chuck Mouraine and “The Best Worst Hockey Player”(This is a Compliment) Doug Wargo.  Jimmy George, Al Sparks and increasing his career breakaway shooting percentage to 92%, Robert Stempian score for the Flyers.  Robert just simply doesn’t miss on breakaways!  He’s lethal!  League penalty minute leader Ryan O’Rourke(slashing) chops Al Phipps(Slashing) who takers high exception, as they reside together in the sin bin.  Toward the end of the game, O’Rourke blows up the oldest player in the league Joe Plati and hits the box with a solo roughing minor penalty.  Ryan did apologize postgame to Mr. Plati.

Break up the Hawks, as they take a deuce today!  Scoring his first three goals of the season – Captain Mark Smyth leads his Hawks to the victory!  Grinders Gerry Krause and Randy Dunaj with singles.  Goaler Tommy Gazley was stellar in nets as he even picked up a tripping penalty!  Jim Chapie with the lone Shark goal.  Dangerous and out of control Sharks player Eric Ersher, with a cross checking and a solo roughing infractions.