CONGRATS TO LONGTIME STING MEMBER TERRY BOYETTE, WHO WAS

AT THE GOLF OUTING!  WHICH IS NOW PROUDLY DISPLAYED

IN THE TROPHY CABINET AT TROY ARENA! 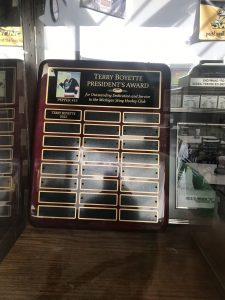 The Wings do all their scoring in the final stanza as they sport four subs today.  Marcin Niecalek, Dave Debrincat and subs Matt Lawson and Glenn Paraskevin round out the Wings scoring.  Pat Berry, Jimmy George and Robert Stempian tally for the Flyers in this penalty free game.

The game was not as close as the score indicates, as the Bruins score twice in the games last two minutes and watch the curfew clock run out as they attempt to line up for the final attack.  The Sharks fielded four subs today and had only nine players as they played with three D.  But if you have the right three D, that can work.  They did and it did!  Steve Dietrich and “Black” Jack Priauix, who scored his shorthanded goal down two men and subs Bob Watson and a top shelf rebound – Steve Orr were the Sharks marksman.  Joe Plati, Chuck Mouraine and on his return from a two week trip to Italy – sub Mike Garlick tally for the Bruins.  Sharks sub Pat Collins goes down hard at games end and has to be helped off the ice.

Habs up 4-3 late in the game, only to see the Hawks score twice in the games final four minutes to steal the victory!  Sammy “The Bull” Bonanno, Mark Smyth, Brian Belloli, Jeff Morton and with the game winning goal – sub Jimmy “Boog” Powell score for the Hawks.  Power winger “Gentleman” Don Courtley with the tour du chapeau and Mike Ala do the honors for the Frenchmen in this penalty free game.

The newly formed line of Chuck Mourain(2 & 3), Joe Plati(2 Goals) and Mike Garlick(3 Helpers) total ten points in the game and carry the Bruins to the W!  Defenseman Bo Altherr and Dougie Roehl with singles.  I will say though – that the Bruins did definitely have some puck luck, as a couple of their goals were of the seeing eye variety.  Ryan O’Rourke and the ever dangerous Kevin Maguire on the right point score for the Flyers.  The Flyers welcomed back defenseman Pauli Polizzi after serving his four game suspension from last season’s playoff run.  Don’t tell Paul, but he is currently on double secret probation!  Yes – he did visit the box this game.

Brian Miller with the well earned whitewash as the Sharks sweep on the day!  Steve “Barney Miller” Dietrich goes five hole for the games only goal!  Hats off also to Hawks sub goalie “Ticker” Chauvin who excelled between the pipes!