This Sam Cupp Championship game held true to form, as the Habs once again defeat the Sharks!  Game MVP Al Pyc with two huge third period goals to put the game away for the Frenchmen!  Pyc’s first goal was of the breakaway variety, as he calmly waited Sharks net-minder Billy Schaugg out and simply deposited the puck into the empty cage.  Dr. Nate McCoughtry with the tour du chapeau and also two helpers.  Nate’s second goal was a change of pace shot that appeared to fool Billy Schaugg.  Larry “School Boy” Rowe went top shelf for the Habs first marker.  As he has done all season – Habs goaler Dar Norrington was outstanding between the pipes!  Except for the Sharks first goal – LOL!  Two minutes into the game the Sharks just dump the puck from their own end off to the side of the Habs net.  Dar goes down on all fours with his goalie stick at an obtuse angle to freeze the puck.  Didn’t happen!  The puck inexplicably squirts loose and Mike Riddle easily backhands the puck into the empty net!  Not a good start for the Frenchman!  But Dar was almost flawless after that snafu.  Billy Mac Jr. with the Sharks final goal, on a beautiful one on three effort, going low far side for the score.  Congrats to the Habs and Captain Bryan Prentice on the closing of a pretty special season! 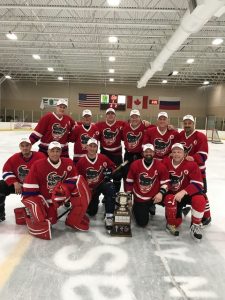