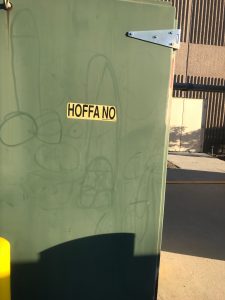 I NOTICED THIS IN THE ARENA BACK PARKING LOT.

GUESS HE’S NOT THERE!

A goaltender battle between Billy Schaugg and Sharks sub Gordon Nadolski!  Both puck stoppers were outstanding!  Jimmy Puffer quiets the hostile crowd with a blazing slap shot with just four minutes left in the game to salvage the tie for the Fish.  Steve Lemieux with a first period cannon for the Flyers.  A special shoutout to Sharks sub Lou Suvak, who appeared in his first game in a year due to a lower body injury!

The Habs beat up on the Bruins!  Deuces wild for Brian Moore, Zach Wagner and Rob “Larry” Giroux.  Paulie “Knuckles” Polizzi also with a goal.  Master facilitator Robbie Olmstead with a five helper game!  Bruins – Chris Isola, Steve Bayagich and John McNeilly.  McNeilly and Brian Moore both receive roughing minors and exchange pleasantries on their way to the box.

This was a barn burner!  The Sharks kill a penalty in the games last two minutes as the Habs pull their goalie and make it a 6 on 4 frenzied situation. The newly formed line of Dr. Nate McNaughtry(2 & 4), Scott Chodun(2 Goals) and Jeff Ivory(2 & 2) total 12 points and factor in all of their teams scoring!  Playing a simply fantastic game at center and obviously no signs of a Nashville hangover – Brian Moore with the tour du chapeau!  Fellow center Zach Wagner with a two goal game.  Robbie Olmstead with a four assist game for a total of nine helpers today!

Deciding to change his number from 8 to 19 – “I play more like Johnathan Toews” – Joey Reiss with the deuce.  Singles for Jack Priauix, Chad Wooten and sub Pat “The Beast” Wosek.   Mike Nalepa, Paul “Stork” Erikson and sub Scott Bozyk tally for the Wings.  Pat Wosek and the Wings Richie Artymovich both incur roughing minor penalties.

Steve “Mario” Lemieux scores his second goal of the game with just under two minutes left in the contest for the top spot Flyers.  Big Rob Rowling also with the deuce.  Mike “King of the Road” Miller with a single.  Jeff Funk, Mike Nalepa, Richie Artymovich and sub Scott Bozyk tally for the Wings who are now winless in their past five contests.

The red hot Hawks have now won their four past doubleheaders!  I’m glad I could contribute to their success calling them a woebegone team five weeks ago!  They have not lost since!  Your welcome guys!  Dave Passwater, Chad Wooten, Greg Kalvin, and “Old Man” Jack Priauix score for the Hawks.  John McNeilly(2), Chris Isola and Steve Baygich tally for the Bruins who drop a double dip today.

In my opinion:
While watching a hockey game, what is the most common negative comment viewers say targeted at the linesman?
Scroll down for the answer.
–
–
–
–
–
–
Drop the damn puck!
Prev post