BACK FROM FLORIDA!  TIME TO DRY OUT!

Rob Rowling with the natural hat trick in the first period send the Flyers to the victory.  Marty Papesh and Frank “Crash” Casali with singles.  Billy Schaugg with a ten save game.  The story of the game was the injury to Hawks sub goalie Mark Lusczki, who had to leave the game in the second period due to a lower body injury.  Mark had to be helped through the lobby into the dressing room.  Get well Mark!  Rick “Ticker” Chauvin was summoned from the “R” pickup skate to sub for the sub.  Hawks sub Jeff “Marine” Steiber with their lone goal.

Paul “Stork” Erickson destroys his hometown Bruins with the trick!  Likewise for Sting rookie Nick Piccolo who records the trick!  Saying he is now a facilitator, Jimmy “Jets” Galloway and sub Fouladbash with the hat trick assist.  John McNeilly with a two goal game for the Bruins.  Looking pretty casual today – “Angry” Joey Ventimiglio with their middle goal.

The Frenchmen win their fifth straight game behind the two goal effort of Rob Giroux.  Singles for Zach Wagner, Scott Mitchell and Paulie Polizzi.  Rob Rowling and Marty Papesh tally for the Flyers.

The Bruins score four goals in the last four minutes of the first period to defeat the Hawks.  As in game one – center John McNeilly with the deuce.  “Angry”, Greg Stacey and Steve Bayagich with singles.  The woebegone Hawks receive goals from Mike T. Brown and Dave Passwater.  The Hawks won their first game of the year and are now winless in their past seven games!

Looking like Alex Ovechkin sweeping down his off wing with his tinted visor, Sharks sub Frank Pedwaydon buries the game winning breakaway goal with just over a minute left in the contest!  That was goal number two for Frank.  Lloyd Rogers and sub Al Pyc also with Sharks goals.  Mike Nalepa(2) and Paul Erickson score for the Wings.  Defenseman James Puffer of the Sharks picks up a simultaneous chop and unsportsmanlike penalties.

Who is that hockey Hall of Famer with me in Florida?

The guy in the middle. 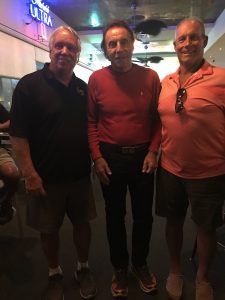