ON MONDAY AFTERNOON JANUARY 17, 2022, LONGTIME STING MEMBER LARRY ROWE HAD A VISIT FROM BALLY SPORTS DETROIT AT HIS HOME IN TROY.

PRIOR TOO AND DURING THE DETROIT RED WINGS MATINEE GAME, LARRY’S FABULOUS ICE RINK WAS FEATURED HOSTED BY OUR OWN STING MEMBER TREVOR THOMPSON! 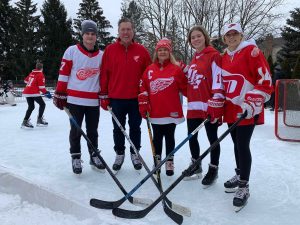 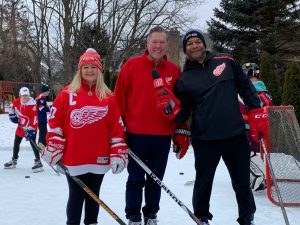 Ronnie Meltsner leads the Bruins with the deuce.  Singles for Joe Plati, Rob Halbhuber and Dave Debrincat.  Defenseman Rick Batchelder with the hat trick assist.  Goal-keep “Ticker” with a strong game in nets.  Al Sparks with both Wings goals, who played with nine players after Steve Orr went down in the first period.

The Hawks snap the Flyers modest winning streak, as they celebrated like they won game 7 of the Stanley Cup in overtime!  Right winger Billy Hagen was all over the ice with the trick!  Robbie Porter and sub Paul Vioalssi with singles.  Forward Keri Topouzian with a breakaway, as Flyers goalie Brian Miller went to his Johnny Bower poke check move as his goalie stick went flying in the corner.  Penalty for throwing his stick.  Topouzian gingerly made his way down the ice on the penalty shot, only to be foiled by Miller on a nice far side low pad save!  Flyers – Steve Lemieux, Sam Bonanno and returning from a lengthy DL stint due to an upper body injury – Stevie Lambert.

Sharks sub JP Higgins records the natural hat trick in the first period!  Big Ben Haynes with the deuce.  Marty Sell also with a goal.  “Gentleman” Don Courtley and Robert Stempian do the honors for the Habs in this penalty free game.

The Flyers continue with their strange pattern of sucking in game one and then blowing out the opposition in game two!  Supreme conditioning?  Sammy “Bananas” Bonanno with a two goal game.  Singles for Ryan O’Rourke, Steve Lemieux, Stevie Lambert, Paul Polizzi and sub Gary Szylanski.  Flyers goalie Brian Miller stones buddy Mike Ala on two breakaways!  If its possible in a 7-3 loss, Habs sub Matt Lawson played a dominating game with a pair of goals!  Robert Stempian with their final marker.  This was a penalty free game.

With first place ramifications, the Wings and goaltender Bobby Rutkoske play a strong game for the W!  Mark Smyth, Al Sparks and Chuck Mouraine tally for the first place Wings.  Bruce “The Enabler” Gooel with the lone Sharks goal in this penalty free game.

Spearheaded by sub goalie Rodney Heid, the Hawks sweep for the day!  Robbie Porter, Bruce Buntin and sub Paul Vioalssi score for the Hawks.  No Bruins highlights as they split on the day.

Who was the Wings organist at Olympia?

I played hockey with Mike in the mid 70’s on Friday nights at Grosse Pointe Arena.

He was a trip!  Showing up with his long shaggy brown hair, brown fur coat and his hockey equipment

in a regular suitcase!