The Wings shake up their lineup and break their four game losing streak!  Speedster Paul Vioalssi with a two goal game for the Wings.  Sub Bobby Watson also with two goals in the game.  Eddie Higgins on a beautiful pass from Bob Watson and Jimmy George also score.  Al Sparks scores twice for the Sharks.  Bruce Gooel scores on a breakaway and sub Scott Leslie also tally for the Fish.  Sharks goalie Brian Miller was besieged with shots this game, as he stoned a Wings forward laying on his back and lifting his goalie stick towards the crossbar to thwart the goal!  Pretty Amazing!

Mr. Marcin Niecalek scores all four Hawks goals!  Nice game Marcin!  Returning from sick bay – Steve Orr with a four helper game.  Wearing a Hawks jersey sporting number 35, Hawks sub goalie “Ticker” Chauvin played and looked like HOF goalie Tony “O” Esposito!  See picture below with Tony(Middle) and myself a few years ago in Florida.  Robbie Porter and Chuck Mouraine score for the Bruins.  Doug Wargo(Interference) of the Hawks impedes Steve Lemieux of the Bruins who takes exception and joins Doug in the box with a roughing minor infraction. 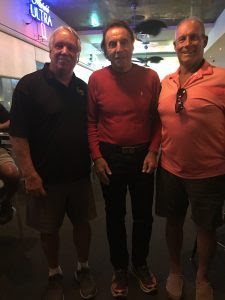 Habs jump out to a 3 zip first period lead and hang on for the W.  Kenny “Prime Time” Wilkins with the deuce.  Singles for James Chapie and Mike Ala.  Goaler “Sugar” John Marcin was extremely solid in nets.  Keith Foucher and Barry Piornack find the back of the net for the Flyers.

A very entertaining game reminiscent to Monday nights NHL Avs/Oilers playoff game with plenty of action!  Hawks score six tines in the first period and go up 7-3, only to see the Wings roar back and almost tie the game with the extra attacker.  The red hot Marcin Niecalek only with a two goal game this time!  Singles for Mark Smyth, Brian Belloli, Doug Wargo, Mike Harke(Also 3 Assists) and a nice backhand goal from Steve Orr.  Jimmy George with the trick for the Wings.  Power forward Kenny Perko and Paul Violassi also score for the Wings.

Mike Schlimgen and the Bruins shut the door on the Habs!  Keri Topouzian and John Perini do the honors for the Bruins.  Ken Debus(Roughing) of the Habs and picking up his second roughing penalty of the night – Steve Lemieux of the Bruins agree to disagree.

The Sharks send the Flyers to a double dip defeat today as they split on the day.  General Robert E. Lee scores twice for the Sharks.  Singles for Ben Haynes and subs Mike Lawson and Scott Leslie.  Bruce Gooel with the hat trick assist. The aggressive Flyers who picked up four penalties today to the Sharks none, receive goals from Keith Foucer(2), Robert Stempian and weaving his way through the Sharks team Kevin Maguire.  See the video of number 4 scoring his goal below.