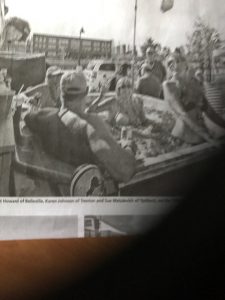 Brian Bellloli scores 18 ticks into the game for the Flyers, only to see the top spot Wings prevail in this very entertaining contest, with no one in attendance.  Al Pyc, Bobby Watson and sub “Darrell” Evans score for the Wings.  Ben Haynes with the Flyers final marker.  Both puck stoppers – the Mikes – winning goalie Mostyn and Schlimgen with excellent games in nets.

0-0 entering the final period.  Then things got wild and wholly!  Pete Gibb(Body Checking) and Don Courtley(Roughing) both hit the box in tandem, exchanging pleasantries along the way!  Then Marty Sell of the Hawks incurs a solo roughing minor penalty.  The Hawks Mark Smyth and sub Lawson both score shorthanded goals as they implore Sell to stay in the box!  Sub Gary Szalanski and Bruce “Cooler Man” Gooel score goals 36 seconds apart to ice the game for the Hawks.  “Bruising” Joe Grusling was the only Hab to slip the puck behind Hawks net-minder “Sugar” John Marchin.

The Sharks win their first game of the season, as goalie Brian Miller stood tall in the nets!  Pat Collins(2) and David Walters tally for the Sharks.  Chris Zanke with the lone Bruins goal.

Flyers sub Chapie scores his first of two goals 46 seconds into the game – and the rout was on for the Flyers!  Brian Belloli also with a two goal game for the Flyers.  Singles for Ben Haynes and Al Sparks.  Jeff Tracy, Cam “Steamboat” Lawrence and sub Munsterman with the Bruins goals as they drop a deuce today.

Wings do all their scoring in the initial stanza and hold on for their second consecutive doubleheader sweep!  Grand Rapids call up “Darrell” Evans with a two goal game.  Singles for Al Pyc and Ronnie Meltsner.  Steve Orr, Mike Lawson and Kenny “Primetime” Wilkins with the Habs markers.  Being not too gentlemanly today – “Gentleman” Don Courtley picks up his second roughing minor penalty of the day, as he and Paulie “Jay” Giles(Roughing) both joust late in the game.  Wings forward Bob “Bugsy” Watson’s second infraction of the game, was a solo roughing minor penalty.  The boys were a little spirited today – eh?

Not only do the Sharks win their first game of the season in game one – they double their win output and dominate in game two!  Pat Collins with the hat trick and five goals on the day for the Sharks.  Singles for Eddie “The Eagle” Higgins, Al “Mike” Phipps and sub Rick Batchelder.  Slick Hawks sub center Gary Szalanski(2) and Marty Sell tally for the Hawks.

Hall of Fame forward Marcel Dionne wore number 16 for the L.A. Kings and New York Rangers.  What was the original number he wore when drafted number two overall in 1971 by the Detroit Red Wings?